This last weekend was the Xterra Snow Valley 21k/10k trail runs. I was really looking forward to this 10k race and I was really disappointed that I was not going to be able to participate this year. Due to the awesomeness of the race director though, I was able to transfer my entry to my brother, Andrew. He is currently in transit from his Army duty station in Korea to his new duty station located in Georgia. He hadn't run a 10k or a trail race before but we were confident that his army fitness would be sufficient to get him to the end. His only goal was to finish before my other brother, Mark, who had signed up the same time as I did.
New this year at this event is the 1k kids run which takes place before the 10k/21k. I signed up both my kids since it was FREE in hopes to maybe get them a little more active. My 9 year old son has been excited and had been looking forward to it. My 11 year old daughter, who is really shy, on the other hand has made it quite clear that she was not going to participate. Although with a little bribery, I was able to get them both to the starting line.


The kids had a blast and they were proud of their medals. In true runner's fashion, they were using the race as an excuse not to do anything that they didn't want to. "But my legs are tired from running the race" ; "Do I have to do that? I just ran a race."

A few minutes following the kids run the 21k race started. After I gave some words of encouragement to my brothers, they joined the other 10k runners at the start line and with the sound of the air horn, they were off. 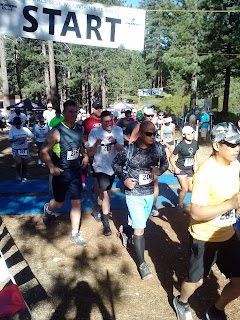 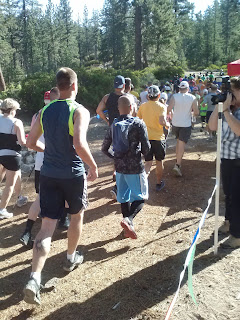 I hung around and cheered for the fast 21k runners who were coming through as they began their second lap and for the 10k winners that had started to arrive. After an hour after he started, I spotted Andrew sprinting hard the last 200 meters to the finish line. He crossed the finish line with a huge smile and his arms raised in the air. It was his first race and you could tell that he really enjoyed the experience and the accomplishment. It made me remember the feeling I had after my first race. He finished with a very impressive 1:01:06. Soon after Mark comes rounding the last turn and he finished in 1:10:58. He had beaten his last year's time by a couple of minutes.

There were many course records broken at this years event. As more and more people hear about this lesser known Xterra event the competition gets tougher and tougher. If my health permits, I will definitely be back next year to compete.
Posted by Unknown at 10:52 AM 2 comments:

Not the Start I Had Planned

I have been toying around with the idea of starting a blog for a while. What has usually prevented me from starting one is the fear of not being a good blogger, i.e. poor writing ability, nothing interesting, too long between posts, etc. Well anyways, I figured since I love reading blogs, I might as well start one and see where it goes. So I hope you are a forgiving reader. :)

I had originally planned on starting this blog about my preparation and training for the Xterra Snow Valley 10k Trail Run this weekend on the 28th. I had been training for months and my running had never been better. So of course I was really excited about this race and completely obliterating my last year's time. Sadly, it was not to be. Last week I contracted pneumonia and pleurisy. Pleurisy, if you don't know (I didn't) is where the lining between the lung and the ribs is inflamed. Causing sharp pain as the lung scratches and catches on the inflamed lining. So I am short of breath and can only move around slowly and carefully. So instead of racing and running, I am reduced to rehabbing my lungs for the next couple of months.

I have cleared my race and training schedule. My goal now is to be ready for the first race of the Xterra SoCal Trail Run Series, Xterra Point Mugu. The race is on October 13th. This gives me 83 days to rehab and retrain.

Wish me luck everybody :)